Postcard from Berlin 2016 (3) - Memorials and Monuments 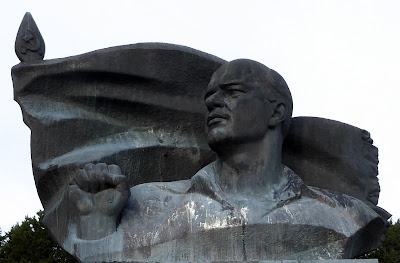 A short walk, north-east, from the hotel, along Griefswalder Straβe leads to Ernst-Thälmann Park, named for a former Communist leader, and featuring an impressive 14m bronze monument, by Lev Kerbel, in his memory.
[Click on images to enlarge] 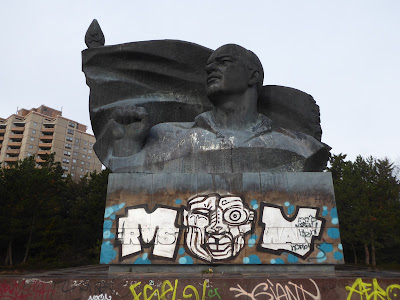 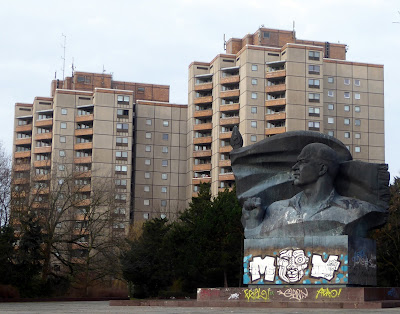 From the S-Bahnhof Griefswalder Straβe it is an easy journey south-east to Treptower Park and the astonishing, vast, Soviet War Memorial.
Completed in 1949 it commemorates Soviet soldiers who died in the Battle of Berlin, April-May 1945. It is estimated that some 80,000 Soviet soldiers lost their lives in the battle, 5,000 of whom are laid to rest in Treptower Park.
Near the entrance to the park is a statue of a woman – the Motherland weeping at the loss of her sons. 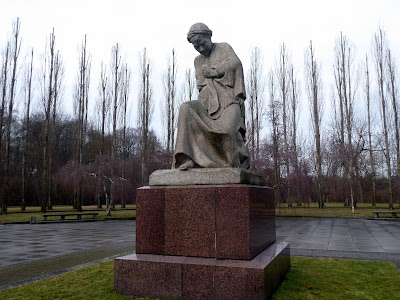 From here an immense vista opens up to a huge figure in the distance framed by a pair of angular constructions. 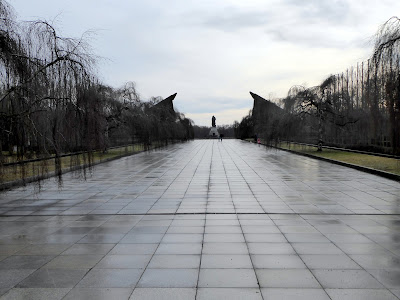 These constructions – it turns out – are two ‘stylized Soviet flags’ built out of red granite and each flanked by the statue of a kneeling soldier. 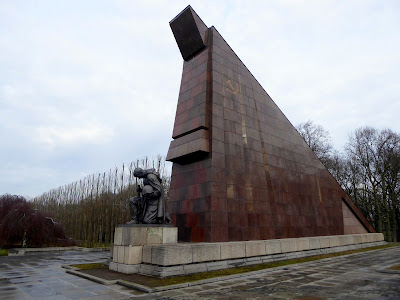 From here to the, still distant, monument the space is lined by 16 stone sarcophagi (one for each of the then 16 Soviet Republics) with relief carvings. 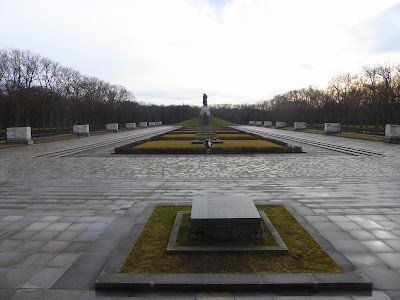 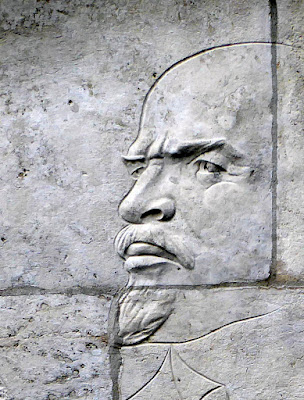 Finally, one reaches the 12m tall statue, on top of a substantial mound, of a Soviet soldier, with a sword, holding a German child and standing over a broken swastika. 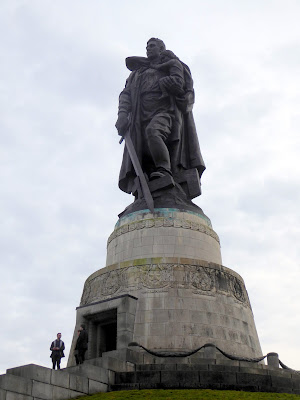 Impressive.
Not a monument, but at 30m high, a monumental sculpture, Jonathan Borofosky’s Molecule Man stands in the River Spree close to Treptower Park.

Further West, in Tiergarten is another Soviet War Memorial. This one, erected in 1945, comprises a curved structure topped by a statue of a Soviet soldier, flanked by a pair of Howitzer guns and a pair of T-34 tanks! 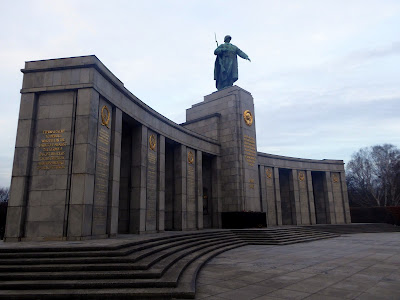 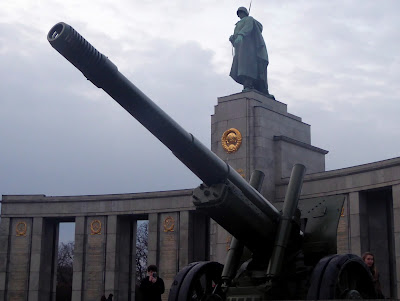 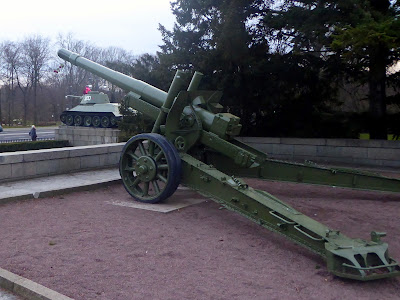 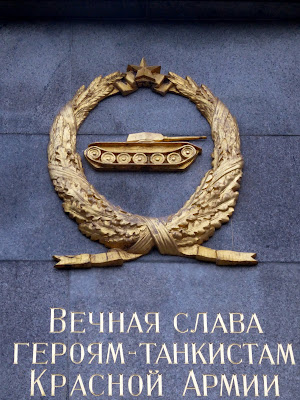 Two more memorials are nearby – on the edge of the Tiergarten is The Memorial to the Sinti and Roma Victims of National Socialism... 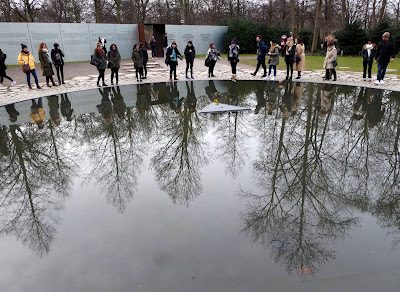 and near to Berlin’s most famous monument: The Brandenburger Tor... 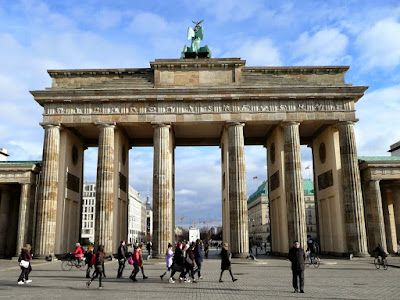 is the Memorial to the Murdered Jews of Europe (designed by Peter Eisenman and Burro Happold. 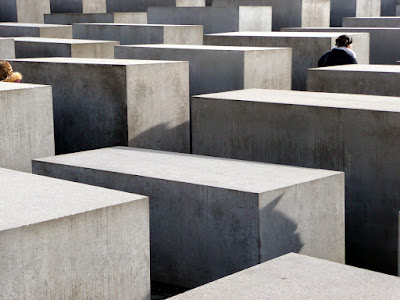 The Brandenburger Tor stands at the end of Unter den Linden on which are to be found Bebelplatz - the site of one of the Nazi's book burnings, now memorialised by the Empty Library  by MichaUllman: a glass plate set into the cobbles looking into a room of empty shelves, big enough to hold the estimated 20,000 burned books... 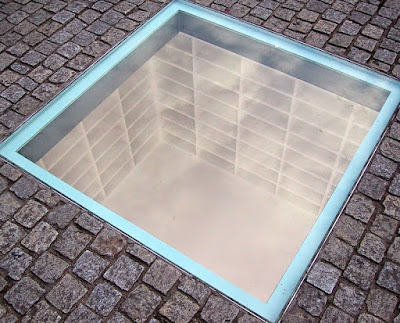 and the 'NeueWache', the sublime neo-classical  memorial to victims of war, by Karl Friedrich Schinkel: the interior is an austere, plain but beautiful space containing only Käthe Kollwitz's Mother with her Dead Son and lit by a central, circular opening in the ceiling. 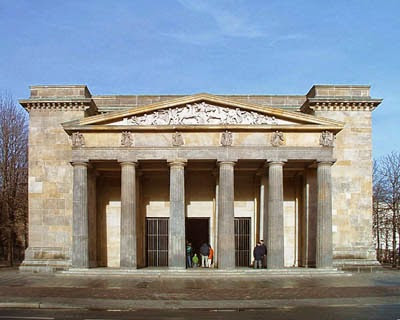 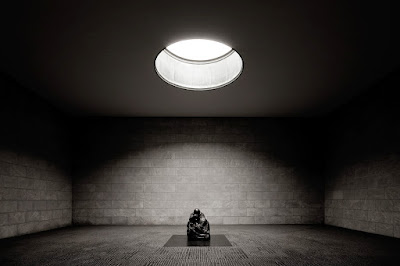 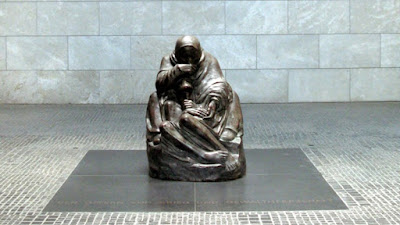 Finally, I paid my respects to Karl Marx and Friedrich Engels, sculpted by Ludwig Engelhardt for the Marx-Engels-Forum between Alexanderplatz and the Spree river. 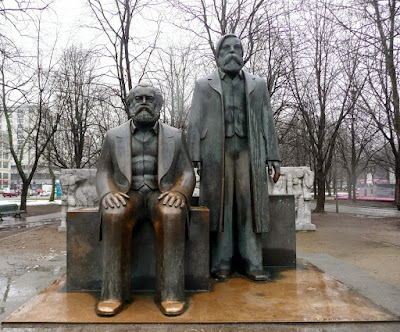 Posted by Richard Salkeld at 16:11