Jeremy Deller is, I think, one of the most interesting of contemporary British artists and I am looking forward to visiting Jeremy Deller: Joy in People at the Hayward Gallery. (This was not his choice of title, as he revealed in an interview on radio 4's Front Row (20 Feb), he proposed Animal, Vegetable, Pop Music.)
Treats in store include a 3D film of bats, a re-creation of Deller's teenage (and later) bedroom, a film of his restaging of the 1984 Battle of Orgreave between striking miners and the police, the remains of a bomb blasted car from Baghdad, a film about 1970s wrestling star Adrian Street, and free tea from a reconstructed Lancashire café! A Middle Class Hero is something to be!
Read a reviews by Adrian Searle and Laura Cumming.

Posted by Richard Salkeld at 13:52 No comments:

I am not a fan of David LaChapelle's work, though I know many are: I find his mannered, baroque excess repellent. According to an article by Elizabeth Day LaChapelle 'retired' from the fashion world, six years ago, to concentrate on art photography. This exhibition at Robilant + Voena, Earth Laughs in Flowers is his take on the vanitas theme in which the traditional motifs are supplemented by contemporary objects. There is certainly something compelling about these lush, suffocating images and I think they very effectively represent the idea that all is vanity. But I don't like them!
Watch a video of LaChapelle talking about his work.

Posted by Richard Salkeld at 13:58 No comments:

Picasso and Modern British Art at Tate Britain until 15 July should be a really interesting exhibition. Britain's relationship to Picasso and Modernism was somewhat equivocal: Andrew Graham-Dixon in his television series A History of British Art unearthed a tape recording of a 1949 speech by Alfred Munnings, retiring president of the Royal Academy, in which he recounted a conversation with Winston Churchill: he [Churchill] said to me: "Alfred, if you met that Picasso coming down the street would you join with me  in kicking his something something?" I said, "Yes, sir! I would!" (Graham-Dixon, A. (1996) A History of British Art, London: BBC, p82)
On the other hand, Richard Shone, in Pablo Picasso and his influence on British Art, recounts how members of the Bloomsbury Group - Clive and Vanessa Bell, and Duncant Grant  - were early enthusiasts for, friends to, and collectors of, Picasso.
The exhibition includes work by British artists who were admirers of Picasso: Vanessa Bell, Duncan Grant, Wyndham Lewis, Ben Nicholson, Henry Moore, Graham Sutherland, Francis Bacon and David Hockney. It will be interesting to see whether these artists can stand comparison with Picasso - whether or or not, the exhibition will be a treat just for seeing the Picassos.
Read reviews by Laura Cumming, Jonathan Jones and Richard Dorment.

Posted by Richard Salkeld at 14:09 No comments: 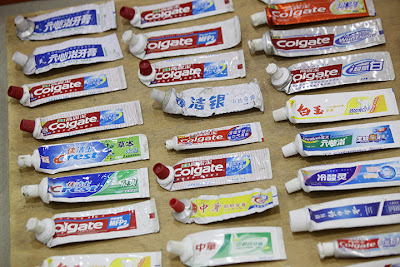 Song Dong: Waste Not is an intriguing exhibition in The Curve at the Barbican Centre until 12 June.
As reported in The New York Times in relation to the installation of the exhibition at MoMA in 2009, Waste Not represents the accumulated possessions of Zhao Xiangyuan. Mrs Zhao lived in Beijing with her husband and two children in a tiny house. The house became crammed with clothes, toiletries, buttons, ballpoint pens...which were used, recycled and hoarded - a seemingly extreme response to the Cultural Revolution's dictum of frugality in daily life.

Mrs Zhao's son, Song Dong has now turned the contents of his childhood home, some 10,000 items into the installation Waste Not. The Guardian reports that, after Song's father died in 2002, depression turned his mother's thrift into hoarding and her house in Beijing was stuffed with clutter. "I asked her why she wanted to fill the room with what to me is rubbish, and she said: 'If I fill the room, the things remind me of your father.'"
See a video of Song Dong in conversation with Barbara London. 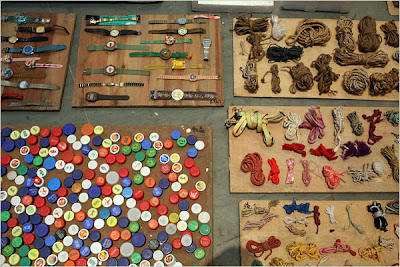 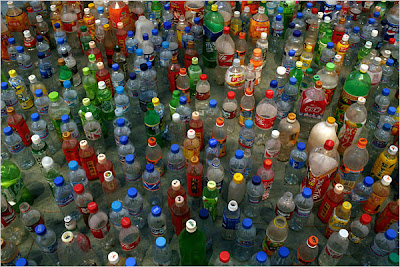 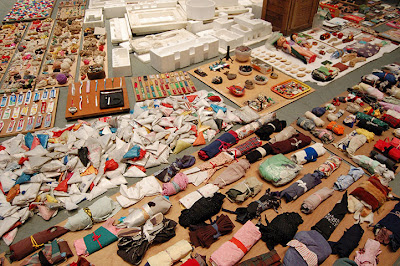 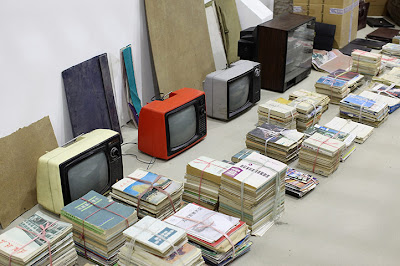 Posted by Richard Salkeld at 13:27 No comments:

Antoni Tàpies died on 6 February, 2012. The Spanish artist's abstractions are notable for the use of readymade objects, sombre, rich colours, and textured materials - marble dust and sand mixed with pigment and varnish. He was, arguably, one of the greatest of European abstractionists.
Read an obituary by Christopher Masters.
Posted by Richard Salkeld at 15:51 No comments:

Mondrian // Nicholson in Parallel at The Courtauld Gallery examines the brief moment when London became an international centre of Modernism, in 1938. In that year Piet Mondrian, at the invitation of Ben Nicholson left war threatened Paris for London. Mondrian and Nicholson together formed a nucleus of avant-gardism in Hampstead (also present were Barbara Hepworth, Naum Gabo, Berthold Lubetkin, Ernő Goldfinger, Ernst Gombrich and Sigmund Freud).
At the outbreak of war, in 1939, Nicholson and Hepworth left London for St Ives; they invited Mondrian to join them, but the countryside hating Mondrian declined and subsequently made his way to New York.
Read a fascinating account of this moment by Frances Spalding as well as in The Courtauld Gallery press release.
The exhibition continues until 20 May.
Posted by Richard Salkeld at 14:27 No comments: