William Klein has been given the Outstanding Contribution to Photography Award  at the Sony World Photography Awards 2012 (see below).
A great photographer; a great artist.
Some work is on show at Someret House as part of the Sony World Photography Awards exhibition until 20 May. More excitingly he will be the subject of  joint retrospective with Daido Moriyama at Tate Modern in October. The pairing seems a good one, but Klein's comment to Sean O'Hagan was "I think it's kind of stupid". Read the full article here.

I would look at my contact sheets and my heart would be beating, you know. To see if I’d caught what I wanted. Sometimes, I’d take shots without aiming, just to see what happened, I’d rush into crowds – bang! bang! I liked the idea of luck and taking a chance. Other times I’d frame a composition I saw and plant myself somewhere, longing for some accident to happen.
Klein, William (1981) Photographs: An Aperture Monograph, New York: Aperture, p16

Posted by Richard Salkeld at 12:29 No comments:

The 2012 Sony World Photography Awards have been announced: the winners and runners up will be on dispaly as part of World Photo London at Somerset House until 20 May 2012.
Below is a selection from the winners -  see details of all Professional category winners here and Open Competiotion winners here. Click on images to enlarge.
The Outstanding Contribution to Photography Award went to William Klein - see separate blog entry, here.

Posted by Richard Salkeld at 10:15 No comments:

Out of Focus: Photography - Saatchi Gallery

Out of Focus: Photography at The Saatchi Gallery is a wide ranging, but selective, survey of contemporary art photography. 38 artists are featured, including both familiar and unfamiliar names; approaches are varied and include artists using found images and working in collage and montage and, as in the Collishaw example above, ceramic, cement, wood and paint!
A selection of examples is shown below: click on images to enlarge; see the Saatchi website for full details.

Posted by Richard Salkeld at 02:32 No comments:

Alex Prager - Compulsion is at Michael Hoppen Contemporary until 26 May.
The exhibition comprises photographs of constructed scenes inspired by tragedies in the media, interspersed with close-ups of eyes. The work is influenced by that of  Weegee and Enrique Metinides as well as films such as Metropolis and Un Chien Andalou. The exhibition will also feature a short film:

La Petite Mort declares that “the act of dying, and the act of transcendent love, are two experiences cut from the same cloth - the former a grand exit, and the latter a slow escape. Indeed, many of the world’s greatest poets have long considered a passionate interlude as man’s closest moment to seeing god.”
(From the gallery website.)

Read a review by Sean O'Hagan.

Stan Douglas: Midcentury Studio is at Victoria Miro until 26 May.
Douglas' enigmatic, constructed images represent the work of a fictional photojournalist working in 1940s and 50s America; Douglas uses authentic 1950s technologies and costumes to, in the words of the gallery's website, 'choreograph the underlying tension of the era'.
Read a review by Sean O'Hagan.
Posted by Richard Salkeld at 06:42 No comments:

Jamie Shovlin: Various Arrangements is at Haunch of Venison until 26 May.
The exhibition presents a series of seventeen large-scale paintings based on the cover designs of the Fontana Modern Masters series published in the 1970s. The paintings represent titles that were scheduled for publication but never appeared. Shovlin's elaborate methodology for producing the paintings is explained on the Haunch of Venison website.
Shovlin is an interesting artist whose previous projects have included the 'curation' of exhibitions of work by the missing schoolgirl Naomi V Jelish, and of the memorabilia of a German glam-rock band called Lustfaust. In both cases they were entirely the creation of Shovlin - though, he claimed on Front Row (18 April) that the band does now exist! Listen to the band here.

Posted by Richard Salkeld at 12:33 No comments:

Katie Paterson: 100 Billion Suns is at Haunch of Venison until 28 April.
Paterson's projects engage with time, space and scale. 100 Billion Suns involves the firing of confetti cannons and refers to Gamma Ray Bursts - these are the brightest explosions in the universe, which burn with a luminosity 100 billion times that of our sun. The confetti cannons contain 3,216 pieces of paper whose colours correspond to each of these cosmic events known to have occured. Every burst of confetti creates a miniature explosion of all of these vast explosions, in just under a second. Watch a film about this project here.
Read an article by Brian Dillon, watch When art meets astronomy, and Tate Shots: Meet the Artist.
Below is  a selection of Paterson's works as described on her website.

A turntable that rotates in time with the earth, one revolution every 24 hours, playing Vivaldi's Four Seasons. If performed from beginning to end, the record would play for four years. The movement is so slow it isn't visible to the naked eye, yet the player is turning, imperceptibly.

History of Darkness is a slide archive; a life-long project, it will eventually contain hundreds upon thousands of images of darkness from different times/places in the history of the Universe, spanning billions of years. Each image handwritten with its distance from earth in light years, and arranged from one to infinity. 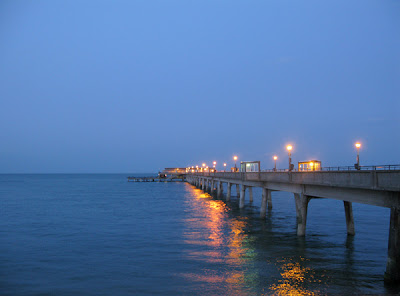 For one month on Deal Pier in Kent, during the hours of darkness, the pier lamps flicker in time with lightning strikes happening live in different parts of the world. Lightning signals from as far away as the North Pole or North Africa are received by an antenna on the pier and translated into light. As the pattern of lightning strikes changes, so the pier lights oscillate correspondingly.

A map documenting the locations of just under 27,000 dead stars - all that have been recorded and observed by humankind.

Working with astronomers from the Mauna Kea Volcano telescope, an image of ‘ancient darkness’ was transmitted on New York television station MNN. Broadcast for one minute, it revealed darkness from the furthest point of the observed universe, 13.2 billion years ago, shortly after the Big Bang and before Earth existed, when stars, galaxies and the first light began to form. 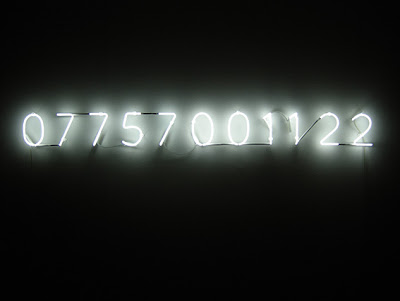 An underwater microphone lead into Jökulsárlón lagoon - an outlet glacial lagoon of Vatnajökull, filled with icebergs - connected to an amplifier, and a mobile-phone, which created a live phone line to the glacier. The number +44(0)7757001122 could be called from any telephone in the world, the listener put through to Vatnajökull. A white neon sign of the phone number hung in the gallery space.

(Listen to a recorded extract of Vatnajökull (the sound of) here.)

Posted by Richard Salkeld at 13:47 No comments: